Refining optogenetic methods to map synaptic connections in the brain 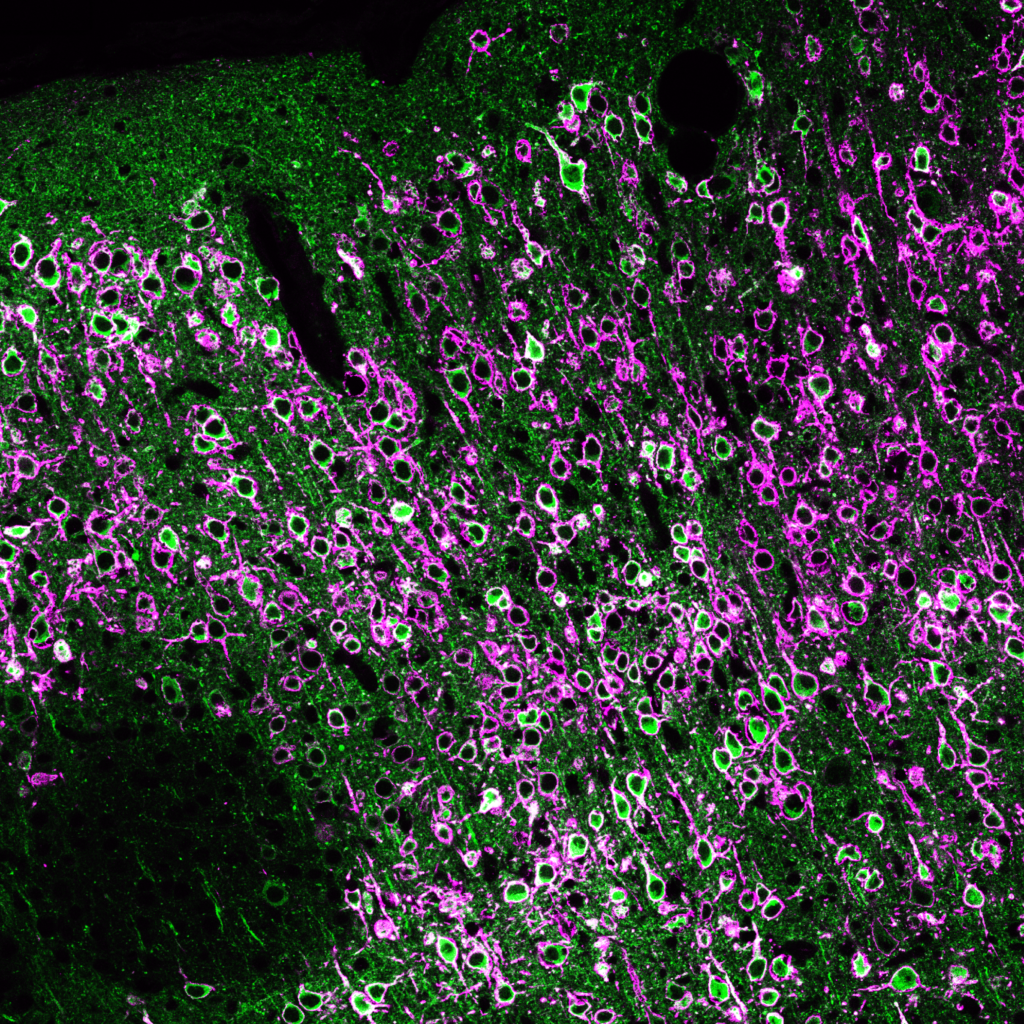 – A fundamental question in neuroscience is how neuronal networks and circuits give rise to brain function, as disruptions in these connections can lead to mental illness and brain disorders.
– With the development of optogenetics, researchers can study the function of specific neurons by turning them on and off with light under various conditions.
– Translating the rules governing the functional organization of neural circuits requires knowledge of the synaptic connections among identified classes of neurons as well as the strength and dynamics of these connections.
– Researchers from MPFI optimized optogenetics to map the neural circuits of the brain of rodents with single neuron resolution.

Turning on and off neural circuits

Optogenetics is a technique that combines genetics and optics to control neuronal activity, which is based on the discovery of light-sensitive membrane channels within pond algae that control movement in response to light. When genes that produce one such light-sensitive membrane channel, called channelrhodopsin (ChR), are inserted into neurons and subsequently exposed to light, they regulate the flow of ions across cell membranes, increasing the neuron’s activity. This allows scientists to discretely control neuronal activity by using pulses of light to activate specific populations of neurons.

Optogenetics is leveraged for mapping connections in the brain by stimulating individual neurons with light and recording the responses of nearby neurons with an electrode. In this manner, scientists ask whether stimulation of a putative presynaptic neuron causes a response in the putative postsynaptic neuron being monitored by the electrode. When ChRs are inserted into neurons using genetic techniques, however, their expression occurs throughout the entire surface of the neuron, from dendrites, the parts of the neuron that receive information, to the axon, the part of the neuron that sends information. The fact that ChR expression is not restricted to one particular domain of the neuron limits the information researchers can collect and interpret about synaptic connectivity, since it can be difficult to determine whether ChR stimulation was generated in a protein located in that neuron’s cell body, or in the axon terminal or in the dendrites of other cells that happen to be passing through the light-stimulated area.

In their August publication in eLIFE, MPFI researchers, Christopher A. Baker, Ph.D. and McLean Bolton, Ph.D., described how they optimize optogenetic methods for mapping neural circuits in the brain. Their improved method uses optical techniques to confine light stimulation to a defined disc-like shape deep within living tissue, combined with a genetic approach for spatial restriction of ChR expression to the cell body and proximal dendrites of neurons. The spatially restricted ChR expression allows unmasking of synaptic connections from neurons whose cell bodies lie close to the dendrites of the postsynaptic cell that would have been occluded by direct activation of ChR on its dendrites. Moreover, it ensures that when light stimulation is applied to a particular cell, any recorded responses can reliably be assigned to the activity of that cell and not to the stimulation of axons or dendrites of other cells that happen to be passing within the disc of light stimulation. This method is a reliable way to rapidly evaluate synaptic connectivity with single neuron resolution and also offers enhanced specificity for other experiments involving optogenetic manipulations.

According to Dr. Bolton, their goal is to construct precise maps revealing the functional connectivity of synapses, without the loss of information that limits the current optogenetics method. Evaluating neural circuits through optical stimulation promises to reveal much about how the nervous system functions, how it is modified by experience, and how it is disturbed in animal models of neurologic or psychiatric disease. “This optimized method is straightforward and easy to implement with standard two-photon microscopy, opening up many possibilities in research not only at MPFI but also for the entire field of neuroscience”, said Dr. Bolton.

This work was supported by the Max Planck Florida Institute for Neuroscience.

Above image:
Section of mouse cortex showing expression of a calcium sensor that is expressed throughout the neuronal cytoplasm (green fluorescence), and the optogenetic sensor construct (magenta fluorescence), which exhibits relative confinement to the neuronal cell body and most proximal processes.