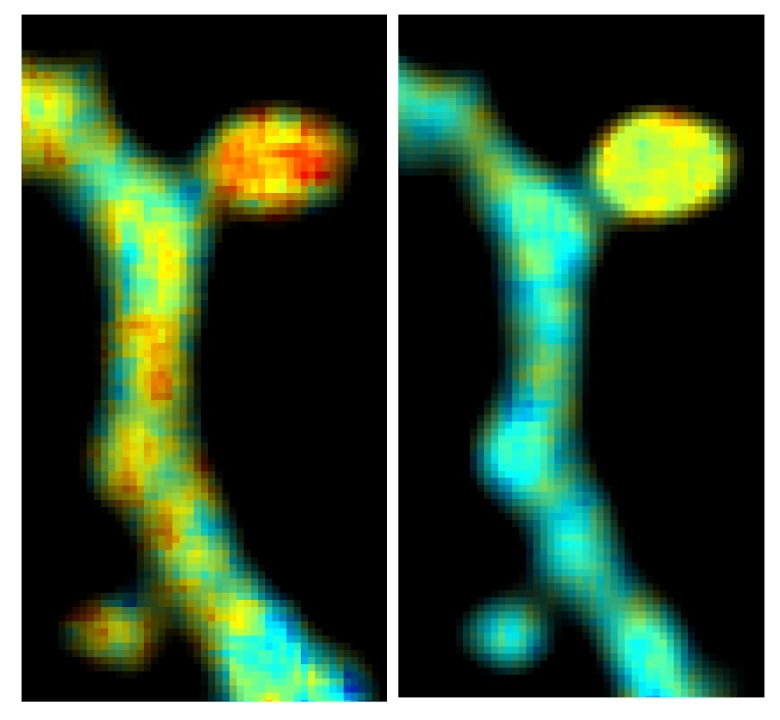 Researchers at Max Planck Florida Institute for Neuroscience and Stanford University teamed up to develop a new molecular tag which allowed visualization of two signaling proteins’ activity in a single dendritic spine in real time.

An ongoing challenge for scientists working to understand the brain is being able to see all its parts. Researchers have spent centuries developing better imaging techniques to see beyond the abilities of our naked eyes. They’ve built microscopes that gather information down to the electron level. They’ve engineered fluorescent tags that make cells and structures of interest more visible. One of the most effective imaging techniques for neuroscientists has been the combination of FRET (fluorescence resonance energy transfer) and FLIM (Fluorescence Lifetime Imaging Microscopy). This duo gives scientists the power to view biochemical dynamics of proteins with high spatial and temporal accuracy, while also allowing them to calculate the minuscule distances between molecules in real time.

At the Max Planck Florida Institute for Neuroscience (MPFI), researchers in Ryohei Yasuda’s laboratory, such as postdoctoral researcher, Tal Laviv, Ph.D., have been working to understand the cellular and molecular mechanisms of learning and memory. The team has been using FRET-FLIM to study the activity of proteins in dendritic spines, protrusions that form off of neuronal branches, and make synaptic connections and communicate with other neurons. Dendritic spines are known to emerge, change shape, and even disappear over a lifetime, and these changes are considered the cellular basis for learning and memory. These imaging techniques were a key factor in helping the team elucidate some of the molecular mechanisms behind this type of plasticity.

Nonetheless, there is an important limitation in using these techniques to understand how multiple types of proteins and molecules interact in living samples. There is only one FRET donor tag (GFP) that will work within a FLIM protocol, so if researchers want to study two proteins, they’ll investigate “Protein A” in one set of experiments, following an additional set of experiments to examine “Protein B” activity. Following these experiments, the researchers will need to draw conclusions about how these two proteins interact based on these two sets of experiments. This not only increases the amount of time it takes to study multiple proteins, but also makes it more difficult to analyze how they interact in space and time. “For those types of systems,” explained Dr. Laviv, “it’s crucial to look at as many proteins as possible at the same time to correlate their activities.”

Researchers at Stanford University, from the research team of Dr. Michael Lin, which specializes in building protein based tools for molecular imaging, reached out to the Yasuda Lab at MPFI after they identified a new set of red fluorescent proteins, or RFPs, named CyRFPs. They suggested this new set of RFPs could be used in combination with GFP for simultaneous imaging.

To determine if this could work, the scientists tested the ability to visualize dendritic spine structure and function using CyRFP and a GFP-based calcium bio-sensor. Using this combination, they were able to monitor the structure and function of spines in real time, even in the brains of living animals. Finally, the team tweaked a variant of CyRFP, which now could be used as a fluorescent FRET donor a part of a FRET pair, named monomeric cyan-excitable red fluorescent protein (mCyRFP1). Scientists in the Yasuda Lab conducted a series of experiments to test the newly proposed FRET pair alongside a GFP bionsensor. The technique allowed them to view, for the first time, the activities of two signaling molecules within a single dendritic spine as the spine was undergoing synaptic plasticity. A description of this new technique was published on October 31, 2016 in Nature Methods.

Dr. Laviv explains that the new technique will increase both accuracy and efficiency of FRET-FLIM imaging experiments and could potentially increase our understanding of how learning and memory ultimately alters the structure and function of dendritic spines.

This work was supported by grants from Human Frontiers Science Program, NSF Graduate Fellowship, a Siebel Scholar Award, National Institute of Health grants R01MH080047, 1DP1NS096787, 1U01NS090600 and P50GM107615, a Burroughs Wellcome Foundation Career Award for Medical Scientists, a Rita Allen Foundation Scholar Award and the Max Planck Florida Institute for Neuroscience. The content of this article is solely the responsibility of the authors and does not necessarily represent the official views of the funding agencies.